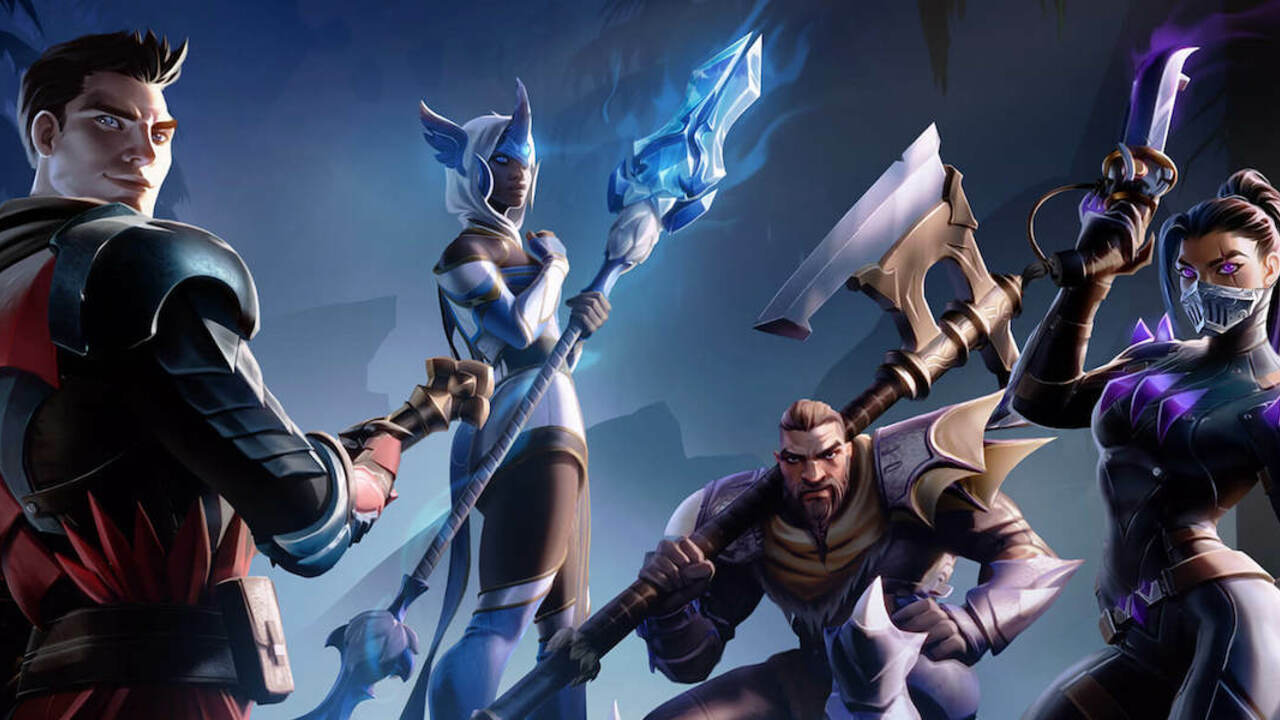 Back in 2004, Capcom released the first title in the Monster Hunter series for the PlayStation 2, kicking off a long and successful franchise while also creating something of a new RPG sub-genre. Since then, Capcom’s series has remained the undisputed king of this sub-genre, but many other players have arrived in recent years with their own take on the formula. The latest of these is Dauntless, a new free-to-play release from Phoenix Labs that endeavours to remove the more intimidating barriers to entry that Capcom’s storied franchise has become known for. In so doing, it also manages to craft an enjoyable and easily approachable experience that keeps the pressure of microtransactions to a minimum.

The premise of Dauntless is simple enough, perhaps a little too much so. You, a Slayer, reside in a floating world called the Shattered Isles, which also happens to be home to all manner of voracious Behemoths. These apex predators are a serious threat to the ecosystem of the Shattered Isles, not just because of their destructive behaviours, but because they feed on Aether, which is a rare magical substance that keeps the islands floating aloft. Naturally, it’s important that these Behemoths be culled as quickly as possible, so it’s the responsibility of you and all the other Slayers from the town of Ramsgate (no, not that Ramsgate) to hunt them down.

The gameplay in Dauntless follows a familiar yet rewarding loop in which you progress your character not via traditional level ups or stat gains, but purely through the equipment they wear. The only way to get better gear is to hunt monsters, harvest their corpses for valuable parts, and use what you can to prioritize new weapons and armour that will enable you to take on even tougher monsters with even more valuable parts. At its heart, the gameplay is really just that simple, and though it may sound like the sort of thing that becomes repetitive with time, the incentives just beyond your reach have a way of keeping you up far too late in the night for just “one more hunt”.

Part of what makes that gameplay loop so addictive is how streamlined and almost arcade-like it is by design. Unlike its clear inspiration, Dauntless is not a game that revels in wasting your time with tedious ancillary quests or overly expansive arenas. Every quest is solely about killing a specific monster or group of monsters, and the arenas in which you fight them are just at the right size that they don’t feel too large or too small. And while fights can take up to thirty minutes if you’re really throwing down with something mean, most take around ten minutes; just long enough that you can do them one after another for quite some time without feeling too fatigued. It’s clear that Dauntless is a game about getting you to fight the monsters as quickly and often as possible, and though inventory management and exploration play a role in that, they never overshadow or distract from the main event.

Prior to entering a hunt, your prep work will often make the difference between an easy takedown or a long and ultimately unwinnable battle of attrition. Almost every NPC in the small hub town will offer some basic service, such as item crafting or weapon forging, and gear can then be easily assigned and managed via an equipment menu. Most monsters have a specific element they wield, such as fire or light, and though you don’t strictly need the ‘winning’ element to take the beast down, it certainly makes things considerably easier.

You have a diverse array of weapons to choose from as well, ranging from axes to bladed gauntlets, and each of these usually have specific models that are derived from killing a particular monster. For the most part, you can choose whatever weapon best matches your playstyle and roll with that, although some hunts benefit from bringing a specific tool. One beast may have a tail that can be cut off with a sharp blade while another may have a hard outer shell that needs something hefty to crack or break it. We rather appreciated this gentle nudging towards other weapon classes, as it ensures that you must maintain a fairly diverse armoury while also showing you what other weapon types play like. Though they all follow the same basic hack ‘n’ slash principles, one weapon class may favour button mashing while another requires more surgical and thoughtful play. Whatever weapon you choose, controls are always responsive and attacks feel like they have sufficient weight behind each hit, making for a satisfying combat experience.

This is helped in no small part by the Behemoths, which of course pose a stiff challenge and demand that you stay dialled into their every movement. Each monster has specific tells that signal different attacks, and a large part of the fun of fighting each beast is learning where the gaps are in their animations and exploiting them for your gain. The Shrike, for example, has an attack where it quickly flies low to the ground toward a nearby target, but if you know when to start the windup for a heavy attack, you can interrupt its flight and bring it crashing down. The path to mastering a monster’s fight patterns is long and difficult, of course, but defeats and mistakes never feel cheap or unearned. Dauntless is very much a game of knowing when to press the attack and when to be patient, and learning the specific application of either playstyle is part of what gives the gameplay such longevity. You’ll succeed or fail because of your own understanding of the monster and its behaviours, and no amount of gear or consumable items is going to make up for a lack of understanding. You can’t brute force your way through difficult fights, and this focus on a more cerebral and skill-based gameplay greatly weighs in Dauntless’s favour.

To ensure that you keep moving at a measurable pace, Dauntless employs a couple of different tiers of “Mastery Levels” that all ultimately pay into your overall Slayer Level. For example, every Behemoth has specific milestones to hit – such as killing it with a full armour set of its own design or dealing a certain amount of damage to it with a specific element – and fulfilling these milestones will serve to move up your mastery level of the beast.

Additionally, you can raise up mastery levels for each weapon class in much the same way, and when you take these two tracks together, it makes for a nicely compelling experience that ensures you’re always moving forward in some way. If, for example, you’re having a tough time taking down a Behemoth and you don’t have a high enough Slayer Level to further enhance your gear, you can take on other Behemoths or practice with other weapons to push your Slayer Level higher and grant you access to better boons. The point being, progression in Dauntless is seldom a straight line. Rather, it’s a series of gates and barriers that you can pass in myriad ways, taking the path that you feel is best to get there. This focus on freedom helps to keep the experience from getting too stale or restrictive, but it never overwhelms you with options; new weapons and Behemoths are introduced at just a gradual enough rate that you feel ready for new challenges and objectives when they come.

As an online game, Dauntless is also blessedly easy to jump into and play with others. You can always go on solo hunts, but the default setting will matchmake you with three other hunters so you can take a Behemoth down as a team. If you’d rather play with friends, that’s an easily accessible option, too, provided that everyone has an Epic Games account. Perhaps the best feature about this online, however, is the fact that it’s both cross-play and cross-progression friendly; meaning you can play with anyone on a platform that runs Dauntless and that you can carry your progress between those platforms as you see fit. This cross-platform functionality is seamless and simple to use, which makes Dauntless for the Switch a compelling proposition given how easily the console can slot into other areas of your life on the go.

From a presentation perspective, Dauntless, unfortunately, doesn’t manage to stick the landing quite as well. It adapts a low-poly, Fortnite-esque visual style that’s charming enough, but the performance positively chugs whether you’re playing docked or handheld. In the hub area of Ramsgate, we experienced framerates that seemed to dip into the 10-15 FPS range, and though the hunts hold a lot closer to the 30 FPS target, there’s still plenty of dropped frames to be seen. On top of this, loading times (particularly at startup) are annoyingly long, which contrasts harshly with the zippy and otherwise fast-moving flow of the rest of the game. Now, Phoenix Labs has already been active in patching out the more egregious performance problems and has pledged to continue diligently optimizing the experience as time goes on, but the experience at the time of writing is, for lack of a better phrase, less than ideal. If you have another platform that can better run Dauntless, we’d suggest you stick to that one and dip into the Switch version only if you’re particularly taken by the convenience of portable play.

Before closing out this review, we feel some special attention must also be paid to the current balance of microtransactions in the in-game economy. As a free game, Dauntless could certainly keep the pressure on players and gate better content and items behind paywalls, but we’re happy to report that microtransactions are kept to a fair and balanced standard. The nature of the gameplay is to grind for parts ad infinitum, and though paying real-world money can help to cut down on some of the grind, we didn’t feel in any place like Dauntless was leaning too far into ‘pay to win’ practices. The majority of the rewards from paying real money are simply cosmetic things that, while certainly nice, aren’t necessary to take down specific Behemoths. Sure, if you shell out ten bucks for the seasonal pass, you’ll have more resources to spend on gear and more armour dyes to choose from, but we never felt seriously disadvantaged going through the game without paying money.