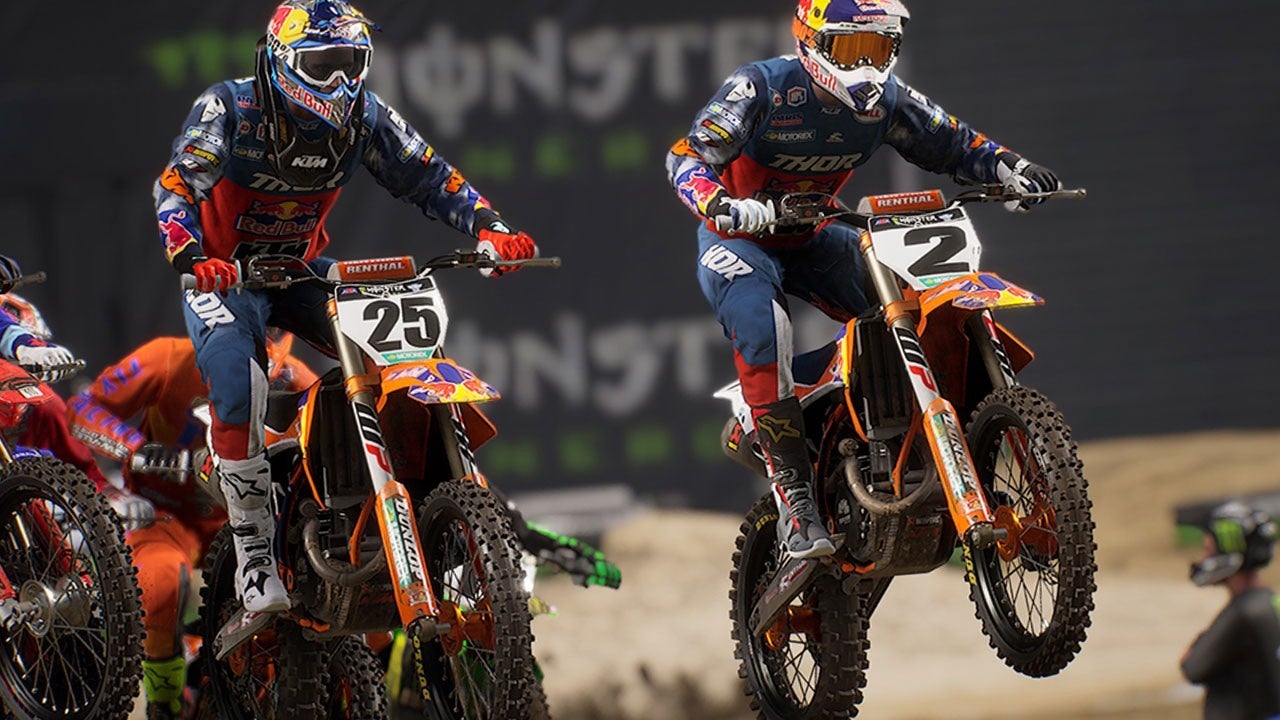 Monster Energy Supercross — The Official Videogame 3 definitely isn’t an elegant name; it’s a blunderbuss burst of buzzwords and branding that sounds like it was put together by a disinterested legal department via email. It is, however, a decent game, albeit one that isn’t exactly dazzlingly different to the equally decent pair of Supercross games Milestone already released in 2019 and 2018. It’s very much another lap on the same rutted course.Following in the wake of its four-wheeled peers carving out yearly cadences that deliver authentic, licensed motorsport experiences – like F1 and WRC – Supercross 3 is an earnest and competent crack at capturing the atmosphere of the motorbikes, ’Murica, n’ Monster Energy-fuelled tone of the AMA Supercross Championship. Hey: if travelling back and forth across the United States trying not to fall over sounds appealing to you, but you don’t have the patience for Death Stranding, maybe this is more your speed. Somewhere, somehow, Norman Reedus’ trousers are tingling, either way.

Back in the Saddle

The fast pace and sense of speed is actually one of Supercross 3’s best assets, and I admire its ability to make even modest velocities seem blistering and dangerous in the cramped, stadium-style circuits – shoulder to shoulder with up to two dozen other riders. There’s something about how the ground whips by and riders’ clothing furiously flaps on their backs as the competitors slice through the air that really sells this.

Of course, returning fans will know this minor graphical flourish has been a feature of developer Milestone’s Supercross series since the franchise debuted in 2018, and it’s one of many that go all the way down from the track editor to what seems to be the same range of butt patches.

While it’s straightforward to pick up the learning curve is steep.

That said, there are some differences here that distinguish Supercross 3 from Supercross 2 beyond the token changes to the HUD. First and foremost is the tweaked bike handling. Bikes feel more connected to the ground than in previous editions, which had a bit of a floaty feel to the back wheel, but the difference doesn’t seem hugely staggering.

Racing remains fairly accessible because there are still two handling settings – standard and realistic. Standard dulls the sense of side-to-side inertia a bit and realistic challenges you to take full control of weight shifting, but there isn’t really a massive gulf between the two. However, while it’s straightforward to pick up the learning curve is steep and, like the past two games, regardless of the handling mode it’s hard to ever quite know what will cause a bail. It’s pretty forgiving if you mess up a rhythm section and case a jump (or three, or four; botch one landing and it tends to doom you to several more ugly jumps and spine-rattling landings) but the barest brush of a trackside tuff block is still regularly enough to send you cartwheeling into oblivion. Try to scrub a jump too late and you may also find yourself pitching into weird mid-air twists that seem to unleash a ferocious fart in the face of physics. There are rewards for not using rewinds during races, but I don’t earn them much.

Whoops, I Did It Again

It doesn’t help that the tutorial can barely be classified as such. It tells players how to start and then just… lists the buttons on screen while a race unfolds, without any further instructions on how to do anything else. A basic history with motorcycle games is probably enough to be able to pick up Supercross 3, keep yourself pointed in the right direction, and accidentally teach yourself how to seat bounce, but it seems odd it doesn’t really make much of an effort to teach players the real nuances of its bike handling dynamics. A deeper dive into the necessary techniques to tackle tracks is buried beneath a bunch of menu shuffling in Challenge Mode, but I found free riding around the open-world compound area allows for experimentation and practice with far less rigid constraints.

I’ve wrung plenty of fun out of Supercross 3 since coming to grips with the handling, however. Nailing a perfect holeshot in the frantic blitz to the first corner or skipping over a series of whoops without losing momentum is very satisfying; you’ve just got to work for it. The 450s are my highlight, and easily the most fun to ride. The increased power allows you to step out the rear, turn harder, and jump further.

The other notable new features are that you can now join official teams in career mode and, for the first time in the series, you can play as female riders. They don’t look any better than the blokes, who aren’t exactly up to 2020 standards themselves, but it’s good to finally recognise that women can, in fact, ride bikes.