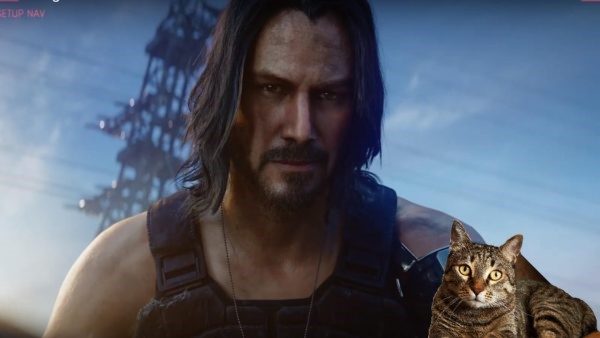 Important announcement! You can pet the cat in Cyberpunk 2077!

Earlier this week, critics from a variety of different publications got to preview Cyberpunk 2077 for four hours – you can read our impressions here.

Between this and Night City Wire, tons of new details were revealed about CD Projekt Red’s upcoming blockbuster. We learned about its replacement for Geralt’s Witcher senses in The Witcher 3, its life-path origins, and even got to see some footage from its prologue.

Most importantly, however, we learned that you can pet the cat in Cyberpunk 2077.

This confirmation comes from IGN, which published its own impressions on the four-hour demo.

“Oh, and I pet a cat!” reads the piece. “That’s very important. I didn’t see any dogs for you dog people out there.”

The lack of dogs is a bit disappointing – it’s always nice to have a canine companion to knock about with. That being said, this doesn’t necessarily mean there are no dogs. Just that nobody managed to find one to play with in their four-hour hands-on session.

Still, the fact you can pet the cat is lovely in of itself. I think that’s going to be one of the first things I set out to do when I get my hands on a copy later this year – in case you hadn’t heard, Cyberpunk 2077 has been delayed until November.

If you’re looking for more things to read about CD Projekt Red’s highly-anticipated RPG, we’ve got some pretty interesting stories for you to check out. As it turns out, people are already posting concept art visualizing what Geralt could look like in Cyberpunk 2077. There’s a cyberpunky Ciri floating about, too.