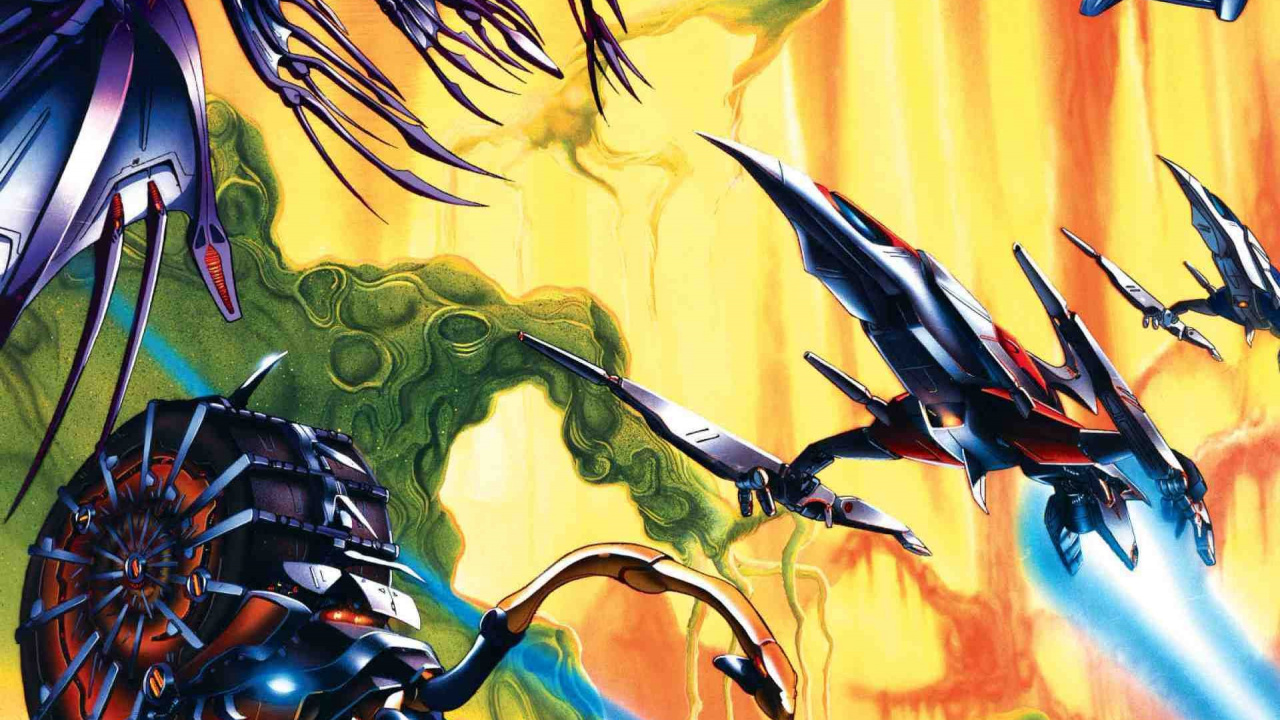 Having covered the coin-operated portion of the acclaimed Darius series of shmups (with the exception of G-Darius and Dariusburst, which are on the upcoming Darius Cozmic Revelation), we now come to the console side of the franchise, which is represented almost completely here. Unfortunately, that representation accounts for something of a mixed bag of titles.

Heading up the set is the Sega Mega Drive port of Darius II, along with its Western Sagaia variation. It’s a fun port of the arcade game, and the reduced difficulty actually makes it a little more enjoyable overall; unfortunately, co-op play has been removed, making it a single-player only endeavour. Sagaia, however, is barely any different at all, meaning it feels a little extraneous to take up a whole menu slot with it.

Also included is the Master System version of Sagaia – until now, exclusive to Europe. It’s a remarkable port considering the hardware, still enjoyable to play and genuinely impressive to see how much stuff they managed to throw around the screen. We’d call it one of the best games on Sega’s under-rated 8-bit console, and it’s really cool to see it included here.

Both the near-identical Super Famicom and Super NES versions of Darius Twin are next up, and they’re strong ports of a game we found a little underwhelming to play. It’s not that it’s bad, but coming from the chunkier Mega Drive Darius II, it’s all a touch… sedate. The SNES was famously saddled with a slower processor than its 16-bit rival, and this meant that the few shooters it was blessed with had to be scaled back to avoid rampant slowdown. We prefer our Darius with a little more intensity, and thankfully, that’s what we get next.

Darius Force/Super Nova is the Darius that the SNES deserved, an atmospheric and brutally difficult shooter. It’s a great fit for Nintendo’s system, playing to its strengths by tailoring its level design to the slower gameplay. The usual branching paths are here, too, and the boss battles move a little beyond the series’ stalwart aquatic adversaries for a feel rather unlike any other game in the set, or indeed the series.

Finally, we have PC Engine titles Darius α and Darius Plus, the former being an exceptionally rare Boss Rush version of the latter, made in extremely limited quantities. Darius Plus itself is, oddly, a cut-down port of Super Darius, a game not included here – why? It’s on the PC Engine Mini console, so M2 (the developers of both the Cozmic Collections and the Mini) have experience with the game. It seems strange to include this lesser version over its superior PC Engine CD take, but it is what it is.

Annoyingly, pre-ordering the Japanese version on Amazon would additionally net you the Game Boy port of Sagaia, which there’s now no way to get. A shame, because it’s one of the better shoot-’em-ups in the Game Boy’s library and well worth playing.

A handful of the games include special Boss Rush and Time Attack modes, but largely the games are presented as they were, with emulation that basically registers as flawless. As with the Arcade compilation, though, there are no other extras to speak of; no galleries, not even a jukebox to listen to the music. This isn’t atypical of M2, but given the prices charged for these Darius collections, we expect more than this.

Still, it’s all about the games, and they’re still good fun. In fact, Darius Cozmic Collection Console is a marginally easier recommendation than the arcade one; there are five distinct titles here rather than three, and they’re all worth playing – even if none of them quite reach the glorious heights of Darius Gaiden.