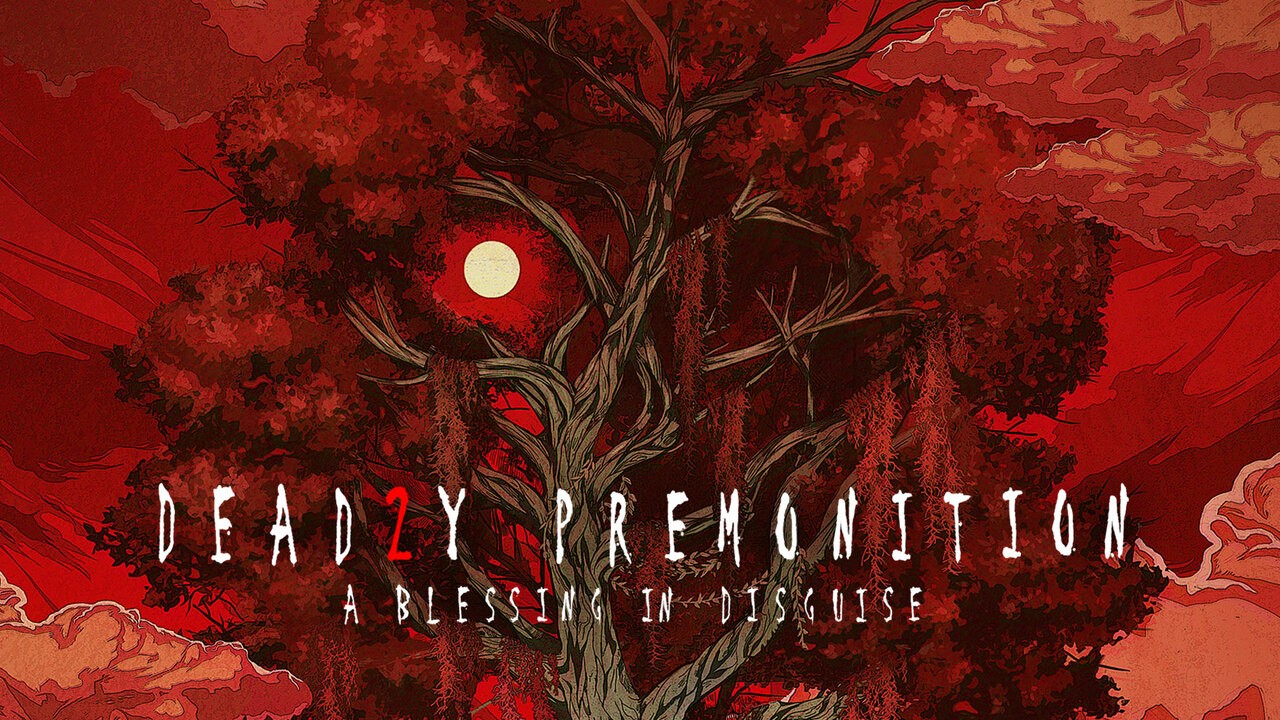 Let’s get the bad (though perhaps unsurprising) news out of the way first: from a pure technical perspective, Deadly Premonition 2: A Blessing in Disguise is a train wreck. Anyone who can’t handle unstable framerates, crude character animation, moiré-like patterns and other visual artifacts or general video game jank should steer well clear of this sequel to 2010’s open-world survival horror title from famed director SWERY.

With that said – and trust us, we’ll return to those issues in a moment – we don’t recall the last time we had quite so much fun with such a flawed game. For many, that alone will make it the worthiest of sequels to the original Deadly Premonition, a cult classic which defied a ton of major technical problems to win a dedicated following.

Deadly Premonition 2 is split across two time periods, acting as both a prequel and sequel. You begin with FBI Special Agents Aaliyah Davis and Simon Jones in 2019 questioning a retired agent about an old case conducted in Le Carré, a small town outside New Orleans. The bulk of the game, however, is spent back in 2005 (prior to the events of the first game) in the shoes of Special Agent Francis York Morgan (York) as he investigates a gruesome murder while holidaying in the Deep South. Aided in his efforts by Patricia Woods, a young Le Carré resident, York meets an eccentric cast of characters and the story sees him take advice and follow clues from otherworldly sources as he explores the town and uncovers the mystery.

As detective work goes, you won’t be needing a deerstalker and a pipe to solve this case; progression is laid out for you in a very linear fashion, and there really aren’t any puzzles to speak of. The game is primarily made up of fetch quests – go there, do this, find three of these, take them to X, and so on – with the occasional bout of repetitive Resident Evil 4-style shooting combat. That part of the game isn’t particularly challenging, either; we had no trouble taking down the game’s handful of bosses the first time of asking. Deadly Premonition 2 calmly carries you along like a police procedural, rather than making you sweat bullets trying to connect the dots and catch the killer.

It’s worth reiterating once more that performance is atrocious. Hitching animations, frame freezes, horrible pop-in – you name it, it’s here. There’s not a straight edge in the game that doesn’t shimmer as the camera moves (a camera that, incidentally, must be manipulated manually at all times). Characters’ lips float disturbingly over their teeth as they speak. Title cards announcing date and location are needlessly subtitled. Shadows flicker with distracting artifacts. Loads are long and frequent.

At one point during our playthrough, in the middle of the most laborious fetch-follow quest in the game, we crashed to the Switch system menu (possibly due to some memory build up after playing the game over a couple of days and leaving our Switch in stand-by mode) and had to replay that entire section again. Of course, to get hung up on technical issues would be to miss the point, although it’s tough to ignore when the framerate dips into the holy-crap-I-could-count-faster-than-this range.

However, as fans of the first game will attest, there’s a strange sense that its technical limitations are somehow additive to Deadly Premonition’s surreal charm. We spent large swathes of our playthrough (around 20 hours, we’d say) just marvelling at how a game released in 2020 could be this ropey. It’s a Switch exclusive at the time of writing, presumably designed with Nintendo’s hardware in mind, and it’s mind-boggling.

And yet! The characters and the story work their magic and somehow have you giving the game the benefit of the doubt. At no time did we want to stop playing. In fact, we found ourselves considering the possibility that it’s somehow an intentional part of the design; a Brechtian alienation device or other knowing trick on the part of SWERY and his team. In certain lights (and more often in still images), Deadly Premonition 2 can actually look quite nice. A thin black outline to characters and objects and some effective voice work give it a style that occasionally makes it look better than an up-rezzed PS2 title; something that its decade-old quest design and execution might suggest.

Here’s an example of the jank: speaking to the concierge at night deposited us outside the hotel, locked into a conversation with an NPC while enemies spawned and began merrily running us through with snapping scissors. Perhaps this is some brand of metatextual throwback to 2005, we thought; a time when open-world ambition and atmosphere made a slideshow framerate more forgivable. It’s a stretch, admittedly, but the fact that Deadly Premonition 2 has you entertaining theories like this is indicative of the goodwill it engenders. Perhaps it’s supposed to be lo-fi and rubbish! Remember that time when David Lynch shot Inland Empire on a camcorder?

Speaking of Lynch, if the first game borrowed liberally from Twin Peaks, the sequel turns up the reference dial to eleven. Coffee-loving FBI Special Agent York channels Dale Cooper’s oddball enthusiasm impeccably, with ‘Zach’ (the voice in his head to whom he recounts memories, voices opinions and ruminates on all manner of topics) acting as his very own Diane. In fact, while the Southern setting adds a little True Detective flavour, the game’s obsession with small pleasures (food, drink, cigarettes), the recurrence of duplicates, jazzy musical interludes and the Red Room pause screen is all pure Twin Peaks.

York’s encyclopedic knowledge of cinema turns him into a walking, talking Wikipedia entry. You’d expect the constant dialogue references to grate, but rather than giving you a Kojima-style subtextual waterboarding, York’s boundless zest for life and the relish with which he discusses the titles, dates and directors of his favourite films endears him to you even more. In fact, it’s possible that his likeable personality helps paper over the myriad technical cracks of the game. Deadly Premonition 2 just wouldn’t work without the Special Agent’s goofy, loveable personality at the centre.

At night, Le Carré becomes a nightmarish realm filled with nasties that only York can see, and the enemies are sufficiently creepy with effective audio ticks and effects providing the chills. There are a variety of side quests and mini-games to partake of when you’re not fighting the forces of darkness or working the case, including bowling, target practice off a riverboat and (our personal favourite) stone skimming.

York gets around town on a skateboard (at least until a paid-for fast travel method unlocks) and you can unlock tricks and jumps to perform. Hitting ‘Y’ sees him jump on his deck as a jaunty tune plays. Don’t expect Tony Hawk-levels of manoeuvrability (especially as you’ll need to keep your thumb on the right stick to move constantly and reset the camera), and the FBI agent repeats the same dialogue endlessly as you skate between locations, but skateboarding beats running around the town playing chicken with your stamina meter.

Beyond the main quests, there’s plenty of side quests to keep you busy if you want to collect all the charms and enhance your gunplay, skateboarding or minigame abilities. The world is a bit empty, with only the odd car and NPC to be found, but the day-night cycle – coupled with meters for hunger and sleep (not to mention personal hygiene) – means you’ll have to manage your time effectively and play around with the available mechanics to speed up the clock (pro tip: smoking is a filthy habit, but it makes time fly).

The bookending of the 2005 segments with the modern-day parts works well as a framing device for newcomers and veterans of the first game alike. Obviously, you’ll appreciate the sequel all the more if you’re familiar with York’s Greenvale case, but the original game is certainly not required reading, even if one or two spoilers inevitably crop up.

Looking at the component parts, it’s hard to put a finger on exactly how SWERY and his team have managed it, but it’s just got something. Perhaps it’s the fact that it doesn’t take itself too seriously. For all its gory horror, Deadly Premonition 2 is undeniably dorky. It jumps irreverently from dismembered corpses to pickpocketing squirrels; investigating crime scenes to skimming stones. York’s enthusiasm for both his work and play is equal, and both activities bleed into each other. The mini-games might seem bolted on, but they also feel as vital to York’s journey as the narrative and the nasties.

And that’s where Deadly Premonition 2 succeeds where other more technically proficient games falter. It may sound strange for what is ostensibly a horror game, but it’s brimming with heart and personality. Individually, many of its mechanics are sorely lacking but, confoundingly, it still hangs together rather well and we were willing to forgive myriad technical sins for the way it made us feel. Even with all the composite elements and touchstones from other media it contains, it somehow forges its own quirky, eminently likeable character.