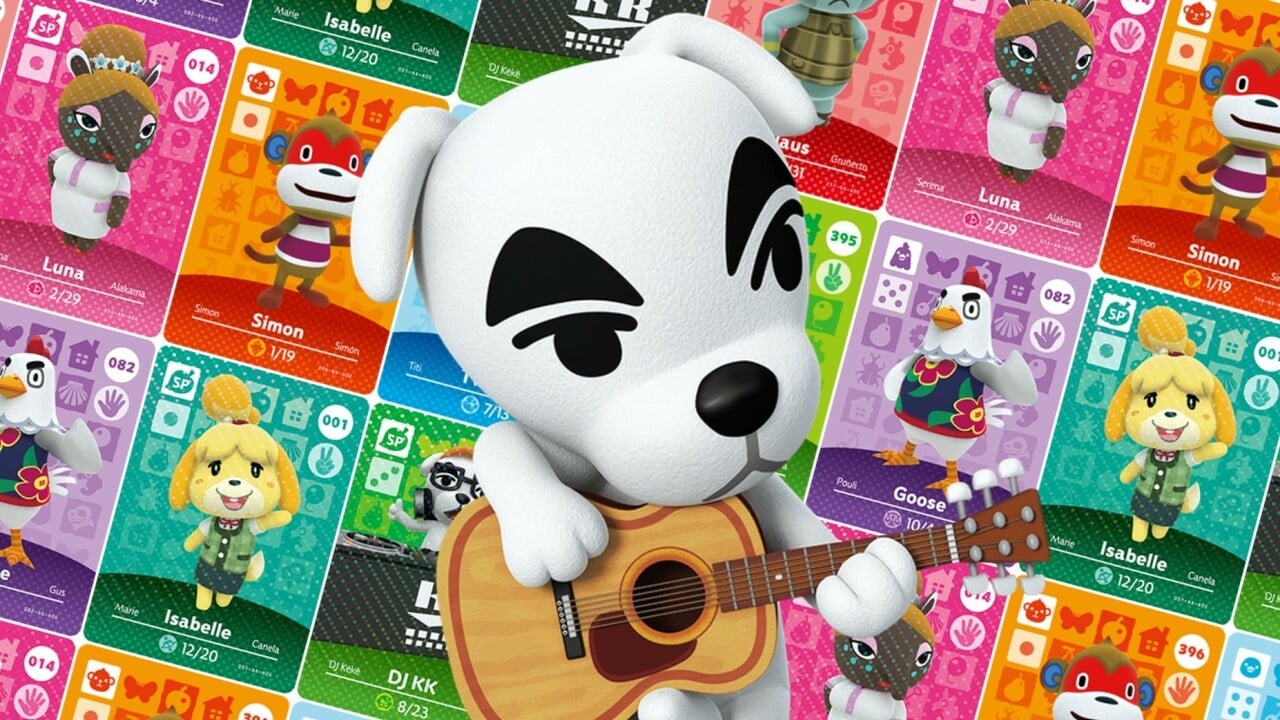 You may know the localised (or original) versions of some of the more famous characters’ names, but below we’ve picked out a handful of our personal favourites – ones that we feel really suit the character well or are otherwise noteworthy.

Thanks to Nookipedia for helping us narrow down the list of localised names. If you’re looking for every available character in New Horizons (and there are over 200 of them!), check out our full list of Animal Crossing villagers.

So, let’s take a look at the alternative international names of ten Animal Crossing characters…

Celebrity, musician, DJ, philosopher – K.K. is a dog of the people. If you’ve been a fan of the franchise since the beginning, you likely already know the genesis of the series’ resident hound dog’s name, so we best begin with him.

Although we know him as K.K. Slider, this title is inferred to be a stage name – he tells players that his real name is ‘Totakeke’ when introducing himself at the start of the very first game back on GameCube (or Nintendo 64 in Japan).

So, while his name is very similar around the world, K.K. doesn’t quite belong in that small group of Animal Crossing characters–which includes raccoon entrepreneur Tom Nook–who are known by the same name worldwide.

Luna is a dreamy tapir who first appeared in New Leaf and escorted players through the Dream Suite to visit other people’s islands while slumbering.

She recently arrived in New Horizons via an update, and it’s a pleasure to have her deliver us to other players’ islands in our dreams.

While her English name relates to the Moon and its nocturnal mystery, her Spanish name, ‘Alakama’, works on two levels.

Firstly, it evokes the ‘magic’ word (and, of course, the Pokémon) ‘alakazam’.

Secondly, ‘a la cama‘ in Spanish means ‘to (the) bed’ (Voy a la cama = I’m going to bed), which fits Luna’s position as dream monitor even better than her English moniker.

You’ll also note that Luna’s birthday falls on that rarest of days, 29th February – a birth date she shares with only the dreamiest of people.

The Japanese name of wolf villager Wolfgang is ‘Lobo’ (or ‘Robo’ thanks to the ‘L’/’R’ issue that crops up through transliteration into Japanese), which is Spanish/Portuguese for ‘wolf’.

Confusingly, Lobo is the English name of a totally different wolf villager (known as ‘Bunjirou’ in Japanese).

In fact, the whole wolf pack is a nightmare when it comes to inter-regional renaming.

For example, the character that English players know as Kyle is called ‘Wolfgang’ in Germany, where Wolfgang goes by ‘Weber’.

The Latin ‘lupus’ shows up in different forms for various wolves depending on region: Audie is ‘Lupilia’ in Italy; Freya is ‘Lupita’ in Spain and ‘Luppa’ in France; Lobo is ‘Lupo’ in Spanish and German, but ‘Lupen’ in Italy; Skye is known as ‘Lupilla’ in Italy.

We could go on, but we’re going a bit lup-y here. There’s another wolf further down the list, but let’s take a break with some chicken…

Goose, everyone’s favourite jock chicken, has been in the series since the beginning. He’s known as ‘Kenta’ in Japan, likely a reference to the finger-lickin’ good variety of fried chicken that hails from Kentucky – a food that has become incredibly popular in Japan around Christmastime.

We’d have probably gone with ‘Colonel’ or ‘Sanders’, but Kenta’s good too.

The French call him ‘Pouli’.

The Germans call him ‘Konrad’.

Nobody calls him ‘Chicken’, something he shares with Marty McFly.

While we’re on the topic, it’s noteworthy that fast food joints like KFC and McDonald’s have been getting in on the tasty Animal Crossing action recently. You might even say… they’re lovin’ it.

Cally is one of several villagers whose name was changed following her English GameCube debut – she was originally known as ‘Sally’.

The squirrel subsequently disappeared on the DS and Wii until returning in New Leaf on 3DS with her new one-letter-different identity.

It seems Witness Protection apparently aren’t too worried if Cally’s past catches up with her.

Cally is known variously as ‘Almendra’ (Spain, literally ‘Almond’), ‘Rosa’ (Italy) and ‘Celia’ (France), although our favourite has to be her German name, ‘Hörnchen’, which apparently translates as ‘Croissant’.

One of our favourites, peppy Twiggy is known as ‘Pichiku’ in Japanese, which we think reflects her cute character nicely.

Twiggy was part of our Wild World village, which we revisited recently after a decade away. We hadn’t seen her for years, but she still came bounding up to us full of beans. Ah Twiggy! She’ll forever hold a special place in our heart.

Elsewhere in the world she’s known as ‘Tití’ or ‘Titti’.

Stop sniggering at the back.

Klaus, derived from the Greek ‘Nikolaos’ according to Nookipedia, is a bear who rocks a classical Grecian style.

He can often be found wearing a toga or a shining breastplate and generally looking curmudgeonly, despite being classed as a ‘smug’ villager. He just looks grumpy to us.

In Italy and Spain he’s known as ‘Gruñerto’ – the ‘gruñ-‘ part relating to grumpy (‘gruñon’ in Spanish) and growl (‘gruñido’).

Yep, that name suits him better, we think.

Returning once more to the lupine villager group, English speakers know this white wolf as Whitney. We suppose the link to the colour of her fur has been right there in her English name all along, but it never occurred to us. Perhaps lockdown has slowed us down.

In French she’s ‘Blanche’ (literally ‘white’), although that’s the name of an ostrich villager in the English game.

In Japan she’s known as ‘Bianka’ from the Italian word for white (predictably, Italians call her ‘Bianca’). In English, Bianca is also another villager – a white tiger.

The Spanish and Germans, however, can’t get enough of the Latin root when it comes to wolf villagers; in those countries, Whitney is ‘Lupe’ and ‘Lupa’ respectively.

Simon is proof that the best villagers have multiple aliases when they travel abroad.

Simon is a lazy monkey and arguably one of the least interesting characters in the game. Of course, the Simon Fan Club must have members (who are welcome to race to his defence in the comments) but for our money he’s a bit dull.

In China they call him ‘Yuǎnrén’, and he’s ‘Etekichi’ in Japan; otherwise he’s plain old Simon.

No offence to any Simons reading this–you are surely all fun and fascinating!–but this monkey needs more business going on. Animal Crossing’s Simon is as bland as they come and he doesn’t even have exotic foreign names to make him more interesting.

He visited our campsite the other day; he didn’t stay long. Simon says… nothing interesting. On your bike, son.

And finally, the lovely Isabelle

Name around the world: various

First introduced in Animal Crossing: New Leaf, Isabelle became a fast fan favourite and is known by various names around the world.

Italians call her ‘Fuffi’, while her French name, ‘Marie’, is a play on ‘mairie’ (meaning ‘Town Hall’, which is pretty neat).

She’s ‘Melinda’ in Germany, and ‘Canela’ in Spain, which means ‘cinnamon’ and is also a pun on ‘can’, another word for dog (her brother Digby is ‘Candrés’ in Spanish).

Back in Japan she’s called ‘Shizue’ – a play on that famous dog breed, Shih Tzu.

Wherever she is, though, this efficient administrator is loved by all. We probably don’t need to hear about her TV habits any more at this stage, but we’ll let that slide. We love you… whatever you’re called!

And there we are! Of course, the names above are just a small taste of some of the delightful variation across the globe when it comes to Animal Crossing villagers. We’ve only scratched the surface of the character list here, so let us know some of your local favourites below.