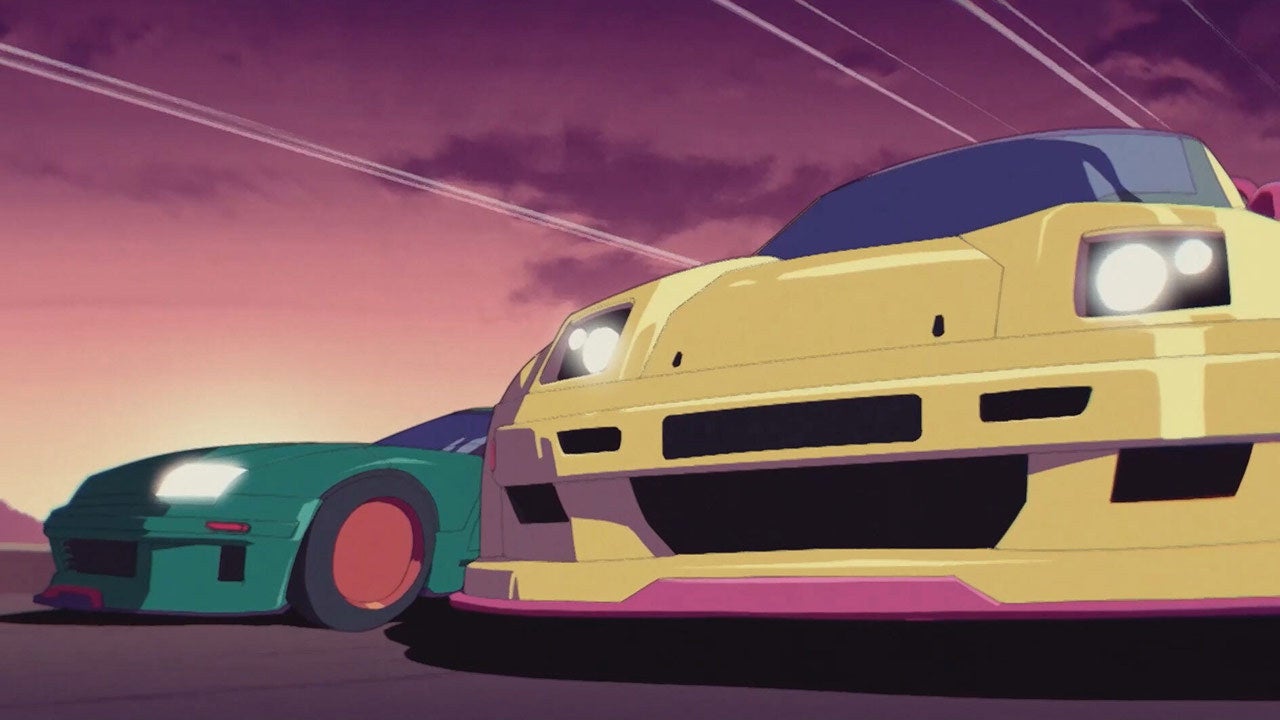 Screaming sideways through the long, arcing bends of Snow Mountain Sprint, my front tires flirted incessantly with the densely packed snow at the side of the road, but such is the precision of the controls that they never so much as kissed. My first few events in arcade racer Inertial Drift were joyfully effortless, as I threw my car sideways around corner after corner. It makes a great first impression, but beyond the initial rush of unadulterated, high-speed thrills, it soon reveals itself to also have enough depth to go the distance.

My first races, you see, were in Edward’s Terra Dart, an easy to handle sporty number with all the depth of a paper bag but, crucially, the perfect vehicle to introduce Inertial Drift’s twin stick controls. Yes, in this racer, you steer with the left stick, but control your car’s drift with the right. This allows you to make separate adjustments on the fly to manipulate the angle of your car as you drift while also shifting it left or right on track, letting you hold the perfect line on basically any curve or glide neatly through any corner. It’s a game changer.

The Dart is the purest, simplest expression of this. You can basically just jam down the accelerator, and attack each corner with twin-sticked abandon. And if you need to hit a really aggressive angle? A tap on the brake will swing the back end out further.

Edward’s Dart, however, is just the beginning. Each vehicle in Inertial Drift’s roster feels distinct and requires a specific approach to master. Ibba’s HPE Dragon, for instance, demands that you brake ahead of tight turns before starting to drift in order to hit the right line and maintain momentum. You can then take advantage of its high acceleration to power out of the corner. Riku’s Venom Industries Ventus will only enter a lazy, lightly angled slide with the drift stick engaged; instead it’s the brake that’s the primary way to get sharper angles through corners. Corey’s HPE Katana, on the other hand, is all about feathering the accelerator as you slide, finessing the drift stick to find the right angle. Break during a slide with that car and it straightens up.

There are just so many extremes to appreciate across the 16 car line-up. Seth’s Coda Supreno is extremely slow building up speed, which means every mistake is costly, but it’s the fastest car in the game when it gets going. It’s thrilling learning how to ease off the accelerator and find precisely the right drifting line to maintain momentum through turns. Gunner’s Roton 7D, meanwhile, has a stack of raw power and drifts on the brake, so feels super twitchy, swinging out wide at the lightest touch. It’s difficult to get a feel for, particularly on sharp corners that can leave you spinning out entirely if not deftly handled. And then there’s Samira’s HPE Jester, which doesn’t want to grip ever. It’s all drifting, all the time.

As you’ve no doubt noted, each car is tied to a specific character, and you’ll get to know this cast as you progress through the Story mode. Playing through Inertial Drift’s story four times – once for each of the selectable characters – gave me a really good taste of what its racing mechanics have to offer, and cleverly uses its dialogue and challenges to teach lessons about how each car handles. Ibba, for instance, won’t be able to post a good enough lap time on City Skylink unless he – and by extension, you – takes Viv’s advice to heart about why sometimes you need to brake to go faster. The challenges here are geared towards making you a better driver, and as I worked my way through the events in each destination I certainly became that.

While the story itself is of no real consequence, its execution is refreshing. There is no testosterone here – no high stakes feuds between hotshot drivers with impossibly large egos. Instead, we largely have a cast of earnest racing enthusiasts – people of all stripes who want to share their love of racing, help each other out, and improve. It’s endearing, really, whether you’re playing as Edward, who only wants to have fun but discovers that with practice he has the chops to be competitive, or Viv, who is the racer to beat, but also humble enough to know she has more to learn.

It provides a backdrop to some absolutely gripping racing – all, essentially, against the clock, as even when you’re directly racing another character, your car safely phases through theirs instead of bumping. And all, I should also add, from a chase cam view – something that I typically never use in arcade racers, much preferring to be low to the ground and in first person. Thankfully, the cars actually look great on track in Inertial Drift and the sense of speed is still very real, even from that vantage point.

The Story mode only encompasses five destinations, but each is gratifyingly distinct. City Skylink, for instance, feels completely different from Sunset Sea Circuit. The former is a city course with wide freeways, long, curving tunnels and technical street sections, whereas the latter takes you from the beach up into the mountains as you hurtle along narrow, sweeping roads, zig zag through a downhill slalom, and screech around a series of switchbacks.

My favourite course, however, is Mount Kirino, a five-or-so-minute point to point race with winding mountain roads, an epic corkscrew that lets you hold a drift seemingly forever, large, sweeping switchbacks, rapid S bends and oh so much speed. And along the way you’ll go from the ski fields, where chairlifts are silhouetted against the night sky, through an ancient forest lit by lanterns and studded by impossibly large trees, down mountain slopes with purple-hued stars and a sliver of moon dominating the screen, and then at last a cityscape appears like a mirage in the distance while you careen along a series of ridges. I’m not in love with Inertial Drift’s cel-shaded, vaporwave aesthetic in general, but it certainly has its moments.

The courses in the Story mode are only a slice of what is available elsewhere. There are 20 course configurations in all, spanning point to point races and circuits, and including both forward and reverse options. If you want to practice these other options you’ll need to hop into the Arcade mode, where you can also test your mettle against the fastest times posted by players around the world. This is fine, but I really enjoyed the context and challenges provided by Story mode, so it’s a shame finishing a character’s story doesn’t open up a Story mode+ which lets you do all the courses in reverse, or perhaps offers up a different selection entirely. (There is, however, an option to choose “Xtra Crispy” when starting a new story save, which offers up harder targets and faster opponents, but the same courses.)

That said, Arcade mode is definitely useful in order to familiarise yourself with specific courses before heading into the Grand Prix mode. Each car/racer has a custom grand prix to complete, and it pays to be familiar with each event, as you only have three second chances to clear the full set. The Challenges are also quite cool – there’s one of these for all the extra cars that can be unlocked, which then lets you take them into other modes. And for fans of same screen action, in addition to online multiplayer, Inertial Drift also features two player splitscreen.