Back in 2004, Mafia: The City of Lost Heaven debuted on the original Xbox to critical acclaim, becoming an instant cult classic for its authentic, cinematic depiction of organized crime in 1930s America. Now, Mafia: Definitive Edition is available on Xbox One, retelling the iconic story of cabbie-turned-mobster Tommy Angelo in this expanded remake that’s been built from the group up.

Set in the Midwest city of Lost Heaven during the Prohibition Era, Mafia: Definitive Edition follows Tommy Angelo, a hardworking cab driver who’s pulled into the criminal underworld after a fateful run-in with the Italian Mafia. As Tommy, you’ll complete jobs for the powerful Don Salieri, rising through the ranks of the mob, evading the law, and defending your turf from the Morello Crime Family. It’s your chance to play the lead in a traditional mobster story, brought to life by gripping cinematics and thrilling missions.

Mafia: Definitive Edition is a faithful remake that improves on every aspect of the original game, from the gorgeous visuals and stellar presentation to the modernized gameplay and expanded story. The city of Lost Heaven and the countryside beyond its streets are even bigger than longtime fans will remember, and you can now cruise around on motorcycles in addition to the many other period-authentic vehicles. On Xbox One X, you’ll be able to take in the stunning sights in 4K, giving you even more appreciation for the visual detail and graphical fidelity of this complete remake.

Making Mafia: Definitive Edition has been a labor of love for the entire team here at Hangar 13. Some of our developers have worked on every game in the Mafia series including the original, so getting the chance to remake it all these years later and introduce it to a new generation is immensely exciting. Whether you’re new to the Mafia series or you’ve been a fan since the very start, we sincerely hope you enjoy living the life of a gangster in Mafia: Definitive Edition. Welcome to the family. 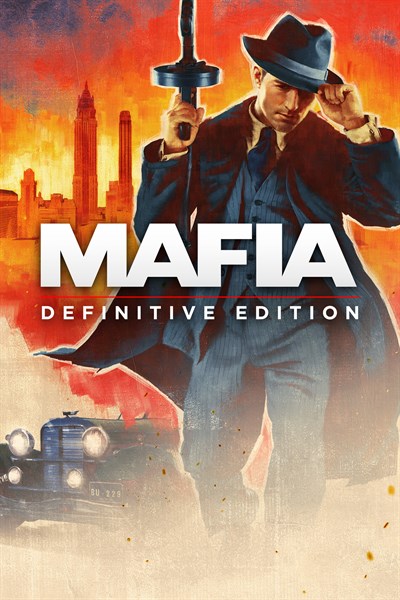 Part one of the Mafia crime saga – 1930s, Lost Heaven, IL
Re-made from the ground up, rise through the ranks of the Mafia during the Prohibition era of organized crime. After a run-in with the mob, cab driver Tommy Angelo is thrust into a deadly underworld. Initially uneasy about falling in with the Salieri crime family, Tommy soon finds that the rewards are too big to ignore.

Play a Mob Movie:
Live the life of a Prohibition-era gangster and rise through the ranks of the Mafia.

Recreated 1930’s cityscape, filled with interwar architecture, cars and culture to see, hear and interact with.

Re-Made Classic:
Faithfully recreated, with expanded story, gameplay and original score. This is the Mafia you remembered and much more.