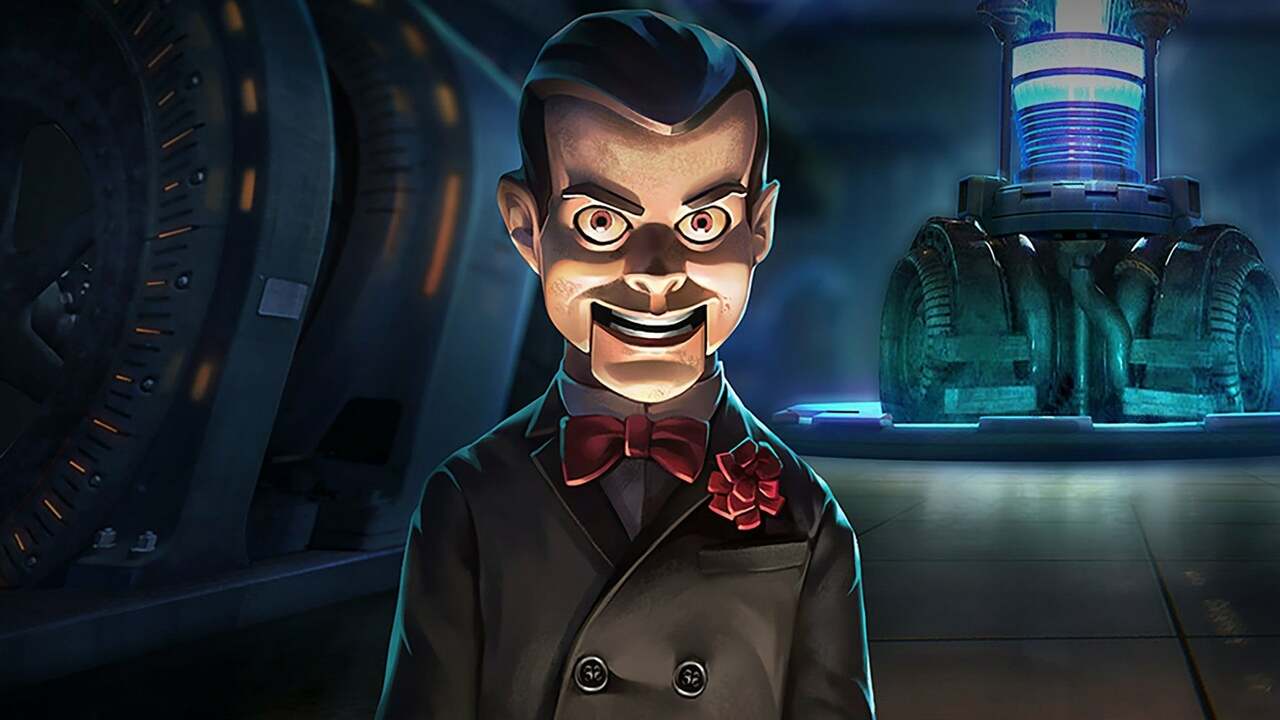 It’s embarrassing to admit this, but Goosebumps Dead of Night can be – on the rare occasion – a touch frightening. Given that the books and films (upon which this game is based) were about as scary as rocket salad, we were rather surprised to find this outing to be genuinely – whisper it – quite atmospheric in places. It has its fair share of problems, but a lot more effort has gone into this game than went into the majority of the book series. We always preferred Point Horror, anyway.

The plot, such as it is, seems to follow on from the ending of the second Goosebumps movie (the not as good one). Author R.L Stine (gamely voiced here by the ever-marvellous Jack Black) has been trapped in his own typewriter by malevolent mannequin Slappy, a ventriloquist’s doll who wants far more than a “gottle o’ geer.”

In the first section of the game, you’ve got to navigate Stine’s spooky (but modest) mansion, evading various classic (that’s what it says here) Goosebumps monsters while collecting the pages of a book within which to once again imprison Slappy in the world of undemanding children’s mass-produced fiction. This translates into a very light-hearted take on the likes of Amnesia, where you must hide from the lurking nasties rather than fight back.

Get caught and you’re done, but these particular spooks seem to be more than a little stupid; duck into a hiding place – even right in front of them – and they’ll immediately lose all interest in you and shamble off to the other side of the house. This makes the idea of stealth a bit of a non-starter, as there’s only one of the baddies who can even remotely give you any trouble due to its occupying a relatively small and crucial space. Even then, it’s just a matter of waiting a few seconds before bee-lining past it and into the next area.

This section is very short – it took us less than an hour, which included several failures and a lot of pottering around – but it is fun. The monsters’ introductions are cool, and Jack Black’s banter as you ransack his home genuinely got a couple of chuckles out of us. Its brevity actually helps to focus the experience nicely, and it would be a fantastic first level in a game with many more similarly diverse stages. Unfortunately, Goosebumps: Dead of Night has three.

Yes, you’re only going to be spending three hours tops in this admittedly well-realised family-friendly freak show. Each segment of the game is admirably different, but all of them come to an end just as they’re getting most interesting, and the game’s conclusion resolves absolutely nothing. In a game with three levels (again – three levels) we don’t want to give away everything, but it’s pretty difficult not to do so. Plot points from the aforementioned Goosebumps 2 movie are utilised later in the game, with the tables turning nicely after being so defenceless. There are also plenty of fun call-backs and references to the book series, which was a great little throb of the nostalgia gland, and showed care and attention.

It looks pretty good too, though screen tearing, shimmering and pop-in are an issue and we found more than a few framerate drops even in less demanding-seeming environments. In a game like this, they aren’t really a huge deal, but it would obviously be better if the game ran smoothly. The framerate was so erratic, we found ourselves wondering if it was left unlocked because of the rumours of an upcoming hardware revision for the Switch, but that’s just speculation.

Loading times are looooooong, too, and you’ll see them every time you die. Thankfully, that won’t be very often. While each part of the game has its own take on first-person adventuring with its own puzzles and challenges, none of them are exactly intense. You’re given every opportunity to succeed and only the very young or particularly controller-illiterate will really struggle. There’s little in the way of timing puzzles, and what’s there is very rudimentary stuff – you can sprint with the L button, but even if you exhaust your stamina ala Skyrim, your walking speed can see you through. Even murderous clowns can’t keep up with the basic walking pace of a young girl.

What we have here is a fun, tonally spot-on Goosebumps adventure that’s unfortunately hamstrung by technical problems and a frankly pitifully short length. Despite these issues, it’s so much silly, spooky fun while it lasts that we’d still give it a fairly unqualified recommendation if it wasn’t thirty flipping quid. Now, don’t get us wrong, price isn’t and shouldn’t be equivalent to game length. But as cheerful as Dead of Night is, it’s not exactly a stone-cold classic, and £29.99 for a game with this little content and next to no replay value seems like a bad deal to us.

A greedy price tag, poor performance and an incredibly short campaign make Goosebumps: Dead of Night more likely to be dead on arrival. It’s a shame, because it’s a well-constructed and entertaining lite survival horror adventure that’s probably perfect for kids. Even then, we’d recommend either waiting for a deep, deep sale, or simply renting the excellent 2015 movie. There’s a lot to like here, but unfortunately, it’s buried under a lot of ugliness. Much like, say… a scary ghoul! Wooooo! Or something.